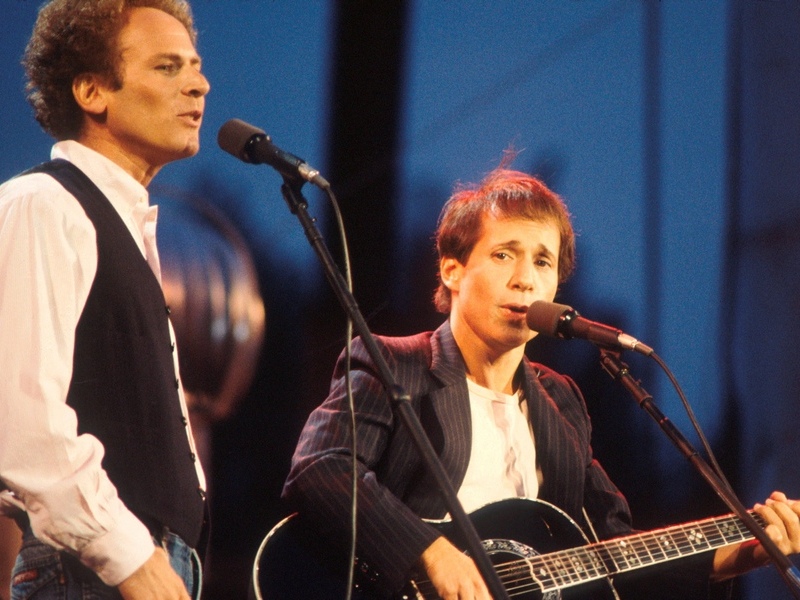 
It was 41 years ago today (September 19th, 1981) that Paul Simon and Art Garfunkel reunited in front of a reported 500,000 fans for a free concert in New York's Central Park. Although the duo had performed together several times after their 1970 break up — most notably at a fundraiser in 1972 for Democratic Presidential nominee George McGovern, a handful of times in 1973 during Simon's first solo tour, and on Saturday Night Live — The Concert In Central Park was Simon & Garfunkel's first full-blown reunion show. Back in 1975, Simon & Garfunkel scored a Top 10 duet with “My Little Town” in 1975, with the song appearing on both Simon's album, Still Crazy After All These Years and Garfunkel's Breakaway.

Prior to the Central Park show, Simon & Garfunkel butted heads about how the concert should be performed. Garfunkel preferred just the duo as they did in the '60s; two voices along with Simon's guitar. Simon insisted on a full band, including a horn section. Simon explained in Simon & Garfunkel – The Definitive Biography how he convinced Garfunkel to see his way: “I kept saying to him 'Artie, the band will jell and when it does, you'll want to sing. You'll like it.'” The majority of the backing band was familiar with the songs' arrangements, having backed Simon on his then-recent One Trick Pony tour.

The duo also performed several of Simon's '70s hits, such as “Kodachrome,” “Me & Julio Down By The Schoolyard,” “50 Ways To Leave Your Lover,” “Still Crazy After All These Years,” “Slip Slidin' Away,” “American Tune,” and Simon's latest hit, 1980's “Late In The Evening,” which was featured twice in the show, being reprised as the concert's final encore. The pair made two nods to early influences, playing the Everly Brothers' “Wake Up Little Suzie,” and performing Chuck Berry's “Maybellene” in a medley with Simon's “Kodachrome.”

In 2018, Art Garfunkel looked back to the 1981 concert, recalling to The Daily Gazette, “It was Central Park, we were full of joy, and I can tell you a singer gets very happy when he performs in front of 500,000 people. It was thrilling to be in front of an enormous crowd of that size. It tells you that they're saying, 'we love you, big time,' and that made us very, very happy.”

Aside from being arguably the first major rock event of the 1980's; culturally, the concert marked one of the music's most important forces coming full circle. Shortly before his 2012 death, legendary New York City DJ Pete Fornatale — who authored the book Simon And Garfunkel's Bookends — recalled to us that by the end of 1968, Simon & Garfunkel's fame had crossed generational boundaries in much the same way the Beatles' music had: “This was the point where the perfect storm had happened, and Simon & Garfunkel were taken from a very formidable level of success into the stratosphere. The soundtrack from The Graduate, (the) Bookends (album) — all these new fans, older fans, moms and dads discovering them by going to the movies to see one of the great motion pictures of the '60s. That brought a whole new audience into the tent, and they were ready to consume anything by Simon & Garfunkel that was out there.”

Art Garfunkel first sang Simon's “American Tune” at the duo's reunion show in Central Park, and has kept it in his solo shows ever since then: “I love Paul's 'American Tune,' and felt such an identity with that kind of song, it's a Bach chorale, that I do it in my show all the time. I never recorded it, but I identify with it, I kind of made it mine. Because it was in the nature of the material. There's a bunch of Paul's things over the years that kill me that I could do my own version of it. Yeah, I suppose that's an interesting album, Garfunkel Does Simon.”

Although it was left off the live album of the event, Simon debuted “The Late Great Johnny Ace,” a tribute to John Lennon, at the Central Park show. In a disturbing moment on the home video version of the concert, a fan can be seen running onstage demanding to speak to Simon. The song was eventually released on Simon's 1983 album Hearts And Bones.

On May 20th, 1982 Paul Simon appeared on Late Night with David Letterman and spoke about the incident. He was asked by Letterman if he ever worried for his safety while on stage: “I always considered it, and of course, after John Lennon’s murder, you have a heightened. . . a heightened awareness of it. My reaction when that guy came up on stage was: ‘He’s messed up the song.’ (David Letterman): (Laughs) That’s interesting. (Paul Simon): 'What’s happened?' It’s a new song, it’s hard enough for anybody to grasp a new song — especially if I’m just singing it with just a guitar and now this guy’s come and he’s messed up the song. My reaction at the time was not one of fear; and neither was Art’s reaction. He was sitting on the stage.”

The film of the concert was shown the next year on HBO, with the soundtrack album hitting Number Six in the spring of 1982. The duo's live cover of “Wake Up Little Susie” was also a minor hit that spring, peaking at Number 27.

Renowned journalist, and three-time Associated Press Sports Editors award-winner Kevin Brockway was just 10-years-old when he and his family made their way into Central Park for Brockway's first ever concert: “I remember it raining, right in the middle of the afternoon. We had gotten there four or five hours early before the start of the concert — and we were still about three quarters of the way back and it was so many people, right? There's 500,000 people, that whole mass of humanity and as a ten-year-old, it was a little intimidating.”

Brockway's memories remain vivid nearly 40 years on: “I remember Ed Koch, y'know, the mayor at the time, introducing Simon & Garfunkel. But, y'know, what was beautiful? I remember 'America' and I think that was, what, the second or third song? 'Scarborough Fair'. . . There were so many beautiful songs. The encores; 'Sound Of Silence,' 'The Boxer' It seems like every song they raised the bar, they really raised it up a level — but the harmonizing on 'America' I thought was really beautiful. That's a song that stuck with me many years later.”

He went on to say that the concert seemed to leave the crowd equally joyous and hopeful: “We thought then that maybe this was, like, this great reunion — but was it really gonna last, y'know? And when you look back on it, Paul Simon really had a renaissance in the '80s as a solo artist. But, Simon & Garfunkel themselves, I didn't know if it was gonna last. So, I think that's part of what really what made it really so special is the fact that we got that moment of them being together onstage and putting on, y'know, one of those. . . the epic performance that really, y'know, people watch and listen to to this day.”

Paul Simon admitted that the 1981 Central Park reunion with Art Garfunkel rates highly in his list of achievements: “We played then for, I think it was about a half-a-million people. It’s not the size so much, it’s that I was, like, right across the street from where I lived. That I was in my home city; and of course people came from all over, so, that would, yeah. . . certainly that’s one of the things when I think about my career, I think of that.”

After the success of Central Park, Simon & Garfunkel spent the better part of 1982 and 1983 touring Europe and North America. Although plans for a reunion album fell through in 1983, the pair reunited live in 1993 and again for their Old Friends tour in 2003-2004, along with dates in 2009.

The long out-of-print Simon & Garfunkel: The Concert In Central Park was recently made available for the first time on DVD as part of a collectible CD/DVD set, as well as a 12-inch 180-gram audiophile vinyl LP.