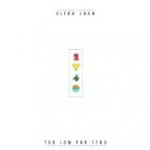 An optimistic, positive rocker, “I'm Still Standing” hit Number 12 on the Billboard Hot 100 and Number Four on the U.K. chart.

Elton John calls “I'm Still Standing” “a great song to sing. At that point, I was struggling over here with my record company that I was with. And it was kind of like defiant. It was also the best video I've ever done.”

Lyricist Bernie Taupin calls the Too Low For Zero album one of the highlights in his long association with John. “It came on the heels of Elton and I writing very sporadically together over the two years prior. We had started working again together, but that was our first total commitment again, and it worked.”

Even though Too Low For Zero was ballyhooed as a reunion between John and Taupin–it's the first album entirely written by the two since Blue Moves in 1976–John says their split was actually overstated: “We never at any time in our lives fell out with each other or had arguments. It was just that he was here (the U.S.) and wrote an album with Alice Cooper…But it was never, ever a split. It was just a healthy time apart. I think if we didn't have that break, we would never have survived. I had fun going around writing with other people.”

Too Low For Zero peaked at Number 25 on the Billboard 200 and earned a gold album. It reached Number Seven in the U.K.