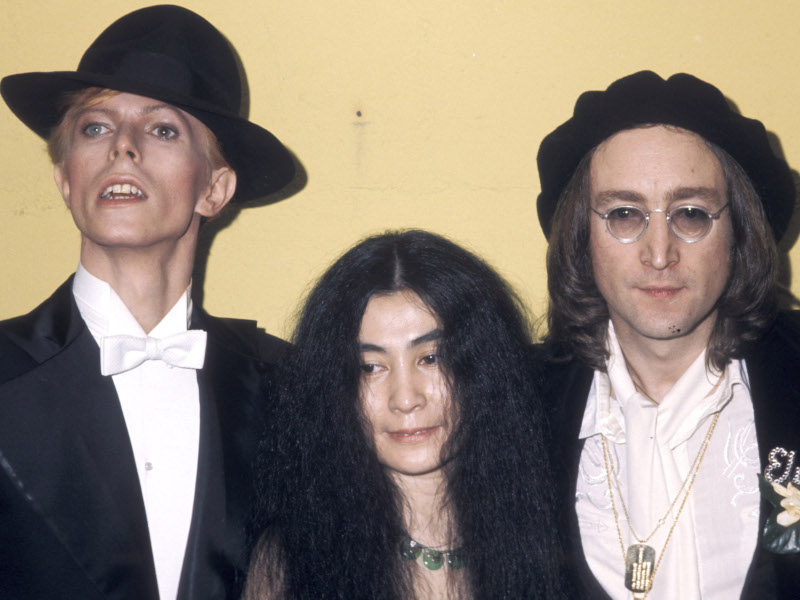 It was 47 years ago today (September 20th, 1975) that David Bowie scored his first Number One hit with “Fame.” The tune, which came as a result of a jam session with John Lennon and guitarist Carlos Alomar — who wrote the song’s distinctive riff — topped the charts for two straight weeks, knocking Glen Campbell's “Rhinestone Cowboy” out of the top spot.

Lennon has been helping Bowie with his blue-eyed-soul Young American album, and had contributed guitar to the “Thin White Duke's” cover of his Beatles classic “Across The Universe.”

Only days before his death in 1980, John Lennon looked back fondly on his brief — but powerful — collaboration with David Bowie: “Bowie was around and we were talkin' and that — he'd say, 'Come down,' and I found myself doin' that. So, he's fiddlin' round, he writes 'em in the studio. Y'know, he goes in with about four words and a few guys and stars layin' down this stuff. And he has virtually nothing — he's makin' it up in the studio. So, I just contributed whatever I contributed, y'know? Like, backwards piano and (sings) 'oooh,' and a couple of things — repeat of 'Fame.' And then we needed a middle-eight, so we took some Stevie Wonder middle-eight and did it backwards (laughs), y'know — we made a record out of it, right? So, he got his first Number One — so I felt that was, like, a karmic thing, y'know, with me and Elton (John) I got my first Number One (with 'Whatever Gets You Through The Night') and I passed it on to Bowie and he got his first Number One — and I like that track, y'know?”

It would be nearly eight years until David Bowie hit the top spot for the second and final time, with the Nile Rodgers-produced smash “Let's Dance.”