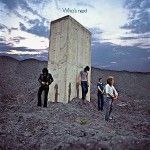 Producer: The Who and Glyn Johns

Recorded: May 1971 at Olympic Studios in London

Although on the surface it appears to be a straightforward love song, “Bargain” is another of Pete Townshend's odes to his guru, Meher Baba.

The song deals with a search for identity and also includes the line “I know I am nothing, without you,” which reflects Townshend's deep devotion to the spiritual master.

Much of the Who's Next album was marked by Townshend's synthesizer experiments, but while “Bargain” features some subtle synthesizer work, it's largely a display of the Who's ensemble power.

The version of “Bargain” featured on Who's Missing and the Thirty Years Of Maximum R&B box set is a live version recorded December 12th, 1971, at the San Francisco Civic Auditorium.

The Who began recording the Who's Next album with longtime associate Kit Lambert but, dissatisfied, switched to Glyn Johns, who would continue to work with the band throughout the '70s.

Who's Next was the only Who album to ever hit Number One in the U.K.