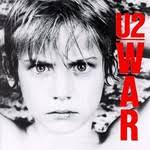 “New Year's Day” was inspired by the Polish Solidarity movement of the early '80s, though it was actually written before the band learned that Poland's leadership would end the nation's martial law on New Year's Day 1983.

The song is marked by the Edge's haunting piano refrain, which kicks things off and leads into body of the tune.

Fans also embraced the song's striking video, which found U2 performing in the snow (the horse riders at the start of the video were hired professionals, not the band members).

The War album was U2's big commercial breakthrough, climbing to Number 12 on the Billboard 200 and debuting at Number One on the U.K. chart.

The album was also something of a healing exercise for the band, as bassist Adam Clayton had become estranged from U2's practicing Christians — the Edge, Bono, and Larry Mullen, Jr. Bono recalls that the strained relationship impacted on the music: “The uptightness of that album is something I feel — tight, taut, words choked, not singing them well.”

Producer Steve Lillywhite broke his own rule of not working with the same band more than twice by producing War, which was his third effort for U2. He was forced into it, however — U2 first chose Roxy Music veteranRhett Davies, but when that didn't work out, the group came to Lillywhite to help bail them out.