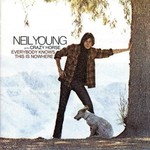 “Cinnamon Girl” was released on Everybody Knows This Is Nowhere, Neil Young's first collaboration with his on-again, off-again backing band, Crazy Horse.

The band was originally called the Rockets, but was renamed by Young himself.

Everybody Knows This Is Nowhere also contains the fan favorites “Down By The River” and “Cowgirl In The Sand.”

Young claims to have written “Cinnamon Girl,” “Down By The River,” and “Cowgirl In The Sand” in a single day, while he was in bed with the flu.

In his liner notes to Decade, Young says that he wrote “Cinnamon Girl” “for a city girl on peeling pavement coming at me, three Phil Ochs eyes playing finger cymbals. It was hard to explain to my wife.”

Released in the spring of 1969, Everybody Knows This Is Nowhere peaked at Number 34 on the Billboard 200.

It was Young's second solo album. His self-titled debut was released just a few months earlier, in November 1968.

“Cinnamon Girl” is one of Young's true concert staples. Few shows pass without him playing the song, and it has turned up on two of his live albums, Live Rust and Weld.