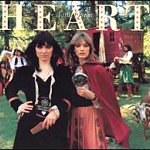 “Barracuda” was written by four members of Heart–lead singer Ann Wilson, singer-guitarist Nancy Wilson, guitarist Roger Fisher, and drummer Mike Derosier. The collaborative effort it took to write the song paid off when it hit Number 11 on the Billboard Hot 100 chart on September 3, 1977.

The b-side to the “Barracuda” single was another album track, “Cry To Me.”

Although Little Queen was the group's sophomore effort, it was Heart's debut for Portrait Records.

Heart's mixture of folk and hard rock brought the band massive success in the '70s. Little Queen was the group's second million-selling album, reaching Number Nine on the Billboard 200 chart.

In conjunction with Heart's success there came considerable criticism that the band borrowed a bit too heavily from hard rock titans Led Zeppelin.

Capitol Records released a live version of “Barracuda” as the b-side to the smash hit “Alone.”