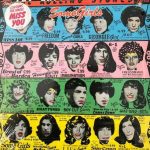 ‘Beast Of Burden’ – The Rolling Stones

Rolling Stones lead singer Mick Jagger, after acknowledging that he tends to write about either “beautiful dreamy-type” women and “vicious bitch-type” women, told Rolling Stone: “Maybe 'Beast Of Burden' is integrated slightly: I don't want a beast of burden, I don't want the kind of woman who's going to drudge for me…Any woman can see that's like my saying that I don't want a woman to be on her knees for me.”

In the same article, Jagger responded to charges of sexism: “I mean, I get accused of being very anti-girl, right?…But people really don't listen, they get it all wrong; they hear 'Beast Of Burden' and say, 'Agggh!'”

The second single from Some Girls, “Beast Of Burden” peaked at Number Eight on the Billboard Hot 100 chart in 1978.

Critic Robert Christgau wrote that Some Girls was “at once a punk-inspired return to the casual spontaneity of their earliest recordings and a disco-inspired demonstration of their pop facility.”