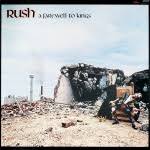 ‘Closer To The Heart’ – Rush

Guitarist Alex Lifeson and bassist Geddy Lee formed Rush in 1969 in Toronto, Ontario, with drummer John Rutsey. Rutsey was replaced in 1974 by Neil Peart, who also became the band's lyricist.

“Closer to the Heart” — a brief track (2:52) in Rush's repertoire — was the Canadian trio's first significant mainstream single, peaking at Number 77 on the Billboard Hot 100.

A Farewell To Kings, Rush's sixth album, was similarly its most successful to date, peaking at Number 33 on the Billboard 200 and selling more than a million copies.

A Farewell To Kings introduced synthesizers to Rush's sonic mix, after the group had followed a guitar-bass-drums path for the album's predecessors.