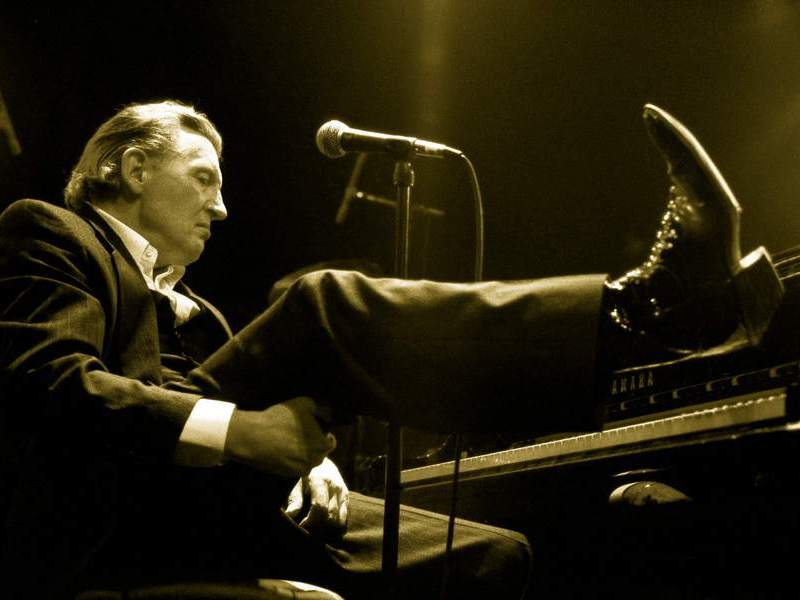 Legendary rock n' roller Jerry Lee Lewis celebrates his 87th birthday today (September 29th)!!! “The Killer,” as Jerry Lee was nicknamed in high school, came of age as part of the legendary Sun Records roster in the 1950's, alongside Elvis Presley, Johnny Cash, and Carl Perkins. Although he grew up with similar influences as his labelmates, his music had a much harder edge — his acrobatic piano playing, much like his personality, was rowdy and dangerous.

Next month will see “The Killer” finally inducted into the Country Music Hall of Fame.

In February 2020, Lewis suffered a minor stroke, forcing the legend to postpone a string of dates. Back in October 2009, Jerry Lee Lewis opened both the Rock & Roll Hall Of Fame 25th Anniversary Concerts at New York City's Madison Square Garden.

In 2013 it was reported that producer T-Bone Burnett was working with “The Killer,” on an album that was to be released in conjunction with the HarperCollins publication of Lewis' recently published memoir — Jerry Lee Lewis: His Own Story — as told to Pulitzer-Prize winning author Rick Bragg. So far, no release date for the album has been announced.

In 2009 Jerry Lee enlisted some of rock's greatest icons — and his own biggest fans — to contribute to his most recent album, Mean Old Man. Among the heavyweights appearing on the set are Mick Jagger, Keith Richards, Ron Wood, Ringo Starr, Eric Clapton, John Fogerty, Mavis Staples, Slash, Tim McGraw, Merle Haggard, Willie Nelson, and Solomon Burke, among others — many of whom appeared on Lewis' 2006 set, Last Man Standing.

Highlights on Mean Old Man include Jagger on the Rolling Stones' Sticky Fingers favorite “Dead Flowers,” Jagger and Richards teaming up on a rendition of the Stones' Exile On Main Street classic “Sweet Virginia,” Ron Wood on the Kris Kristofferson-written title track, Eric Clapton and James Burton playing guitars on “You Can Have Her,” Ringo Starr and John Mayer joining in on “Roll Over Beethoven,” and Kid Rock and Slash appearing on “Rockin' My Life Away,” Sheryl Crow and Jon Brion teaming up on “You Are My Sunshine,” and John Fogerty appearing on a new recording of his Creedence Clearwater Revival standard “Bad Moon Rising.”

John Fogerty told us that getting to know “The Killer” was very different from some of his other idols: “Jerry Lee Lewis is a little more . . . um . . . distant, I guess you would say. You just feel like you're walking on eggshells a little bit. So you . . . you're very careful. Which I was, anyway.”

Jerry Lee was asked whom, out of all the rockers on his recent albums, he enjoyed playing with the most: “That would be hard to say, I couldn't pick one. I enjoyed doin' it with all the boys and it was fun with each and every one of them. From Bruce (Springsteen) on down to Jimmy Page, you name 'em.”

Jerry Lee saw only three songs hit the Top Ten during his career. Though his debut single, “Crazy Arms,” didn't cause much of a stir, 1957's “Whole Lotta Shakin' Going On” was the record that broke through for Lewis. The song first sold 100,000 copies in the South, and then an appearance on The Steve Allen Show catapulted its sales to six million nationally.

Unfortunately for his career, he was the subject of popular scandal, too. The fact that he married his 13-year-old cousin in 1957 cost him the respect of many fans, and forced him to cancel a UK concert because the fans were so outraged.

Since then, he's remarried several times and endured well-documented battles with the I.R.S., drugs, and health problems.

Jerry Lee Lewis told us that he has one last project to cross off his buck list, an all new collection of gospel recordings: “I wanna do an gospel album next. Not a lot of the new-type stuff, but a lot of the old-type stuff. The old gospel (that) we sing. I was raised in the church and I play songs. . . a lot, and that has a big bearing on it.”

In 1989 Dennis Quaid starred as Jerry Lee in the heavily whitewashed biopic, Great Balls Of Fire.