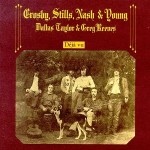 One of rock's first “supergroups,” CSN formed in 1968 after Stephen Stills left Buffalo Springfield and David Crosby left the Byrds, while Graham Nash was planning to leave the Hollies.

Neil Young, who was in Buffalo Springfield with Stills, joined the group in June 1969 at the suggestion of Atlantic Records chairman Ahmet Ertegun.

The group's legendary appearance at the first Woodstock festival was only its second live performance.

Although it's part of the Deja Vu album, “Teach Your Children” was recorded without Young.

Nash says that with this song, he wanted “to write something so personal that every single person on the planet can relate to it. Once it's there on vinyl it unfolds, outwards, so that it applies to almost any situation.”

Nash adds that, musically, “'Teach' started out as a slightly funky English folk song but Stephen put a country beat to it and turned it into a hit record.”

The Grateful Dead's Jerry Garcia had only been playing pedal steel guitar for two weeks when he played on the song.

“Teach Your Children” peaked at Number 16 on the Billboard Hot 100 charts and has gone on to be an enduring singalong at the group's concerts and at campfires everywhere.

Deja Vu, the first full-fledged CSN&Y album, hit Number One on the Billboard Top 200 chart and was certified gold after its first week of release.

The album has sold more than 7 million copies.