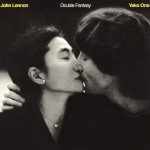 Recorded: August-October, 1980 at the Hit Factory in New York City

“Watching The Wheels” is the one song on the Double Fantasy album in which Lennon reflects on the peacefulness of the five years he spent away from the music industry to raise Sean, his son with Yoko Ono, who was born in 1975.

Lennon has said that hearing the B-52's on the radio inspired him to return to the studio to work with Ono, feeling that mass tastes had finally caught up with the kind of music she made.

The Double Fantasy sessions with producer Jack Douglas yielded 22 songs, which were split between Double Fantasy and the posthumous Milk And Honey in 1984.

Released as the third single from Double Fantasy, “Watching The Wheels” hit Number 10 on the Billboard Hot 100 and peaked at Number 27 in the U.K. in the spring of 1981.

Double Fantasy was Number One for eight weeks on the Billboard Top 200, with sales fueled by Lennon's assassination on December 8th, 1980 in New York City by a deranged fan named Mark David Chapman.

In the U.K., Double Fantasy hit Number One in early 1981 and spent four weeks at that position.

The album has sold more than three million copies.