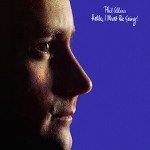 “I Don't Care Anymore,” a bitter diatribe stemming from his first divorce, is the lead-off track to Phil Collins's second solo album, Hello, I Must Be Going, though he was still in Genesis at the time.

Though hardly Collins's most successful single, “I Don't Care Anymore” did sneak into the Top 40, peaking at Number 39 on the Billboard Hot 100.

Collins has used it as the opening song on several of his tours.

Daryl Stuermer, the only other musician on the track, was the touring guitarist in Genesis from 1978 to 1986.

Hello, I Must Be Going — named after the line in the Marx Brothers song “Captain Spaulding” in the film Animal Crackers — was also successful, hitting Number Eight and selling more than two million copies.

The album led to Collins's first solo tour, which was billed as Phil Collins In Concert With The Fabulous Jacuzzis And The One Neat Guy. The “One Neat Guy” was a different special guest that Collins arranged for each stop on the tour.