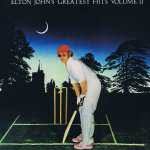 “Philadelphia Freedom” was recorded just as a single and not for any specific album.

“Philadelphia Freedom” was Number One on the charts for two weeks. It was Elton's fifth Number One single in less than three years.

The song was inspired by the U.S. World Team Tennis (WTT) League and particularly by women's champion Billie Jean King and her team, the Philadelphia Freedoms. The team had made a custom warm-up suit for John, who is a tennis devotee, and he promised to write a song in return.

King recalled that she first heard the song during the 1974 WTT playoffs, when the Freedoms were playing in Denver and John and his band were recording at nearby Caribou Ranch: “He came back to the dressing room — I had a real important match to play — and was all excited, saying 'You've got to listen to this tape. This is it, the song I wrote for you. Do you like it?' So he played me a rough mix of 'Philadelphia Freedom,' and of course it was great. And when he got to the chorus he said 'Listen to this part… Hear the beat? That's you when you get made on the court.'”

The B-side of the “Philadelphia Freedom” single was a live recording of “I Saw Her Standing There,” with John Lennon as a special guest. It was recorded at Lennon's final live concert appearance, at Madison Square Garden in November of 1974.

“Philadelphia Freedom” finally appeared on an album in 1977, as part of John's Greatest Hits, Volume II.