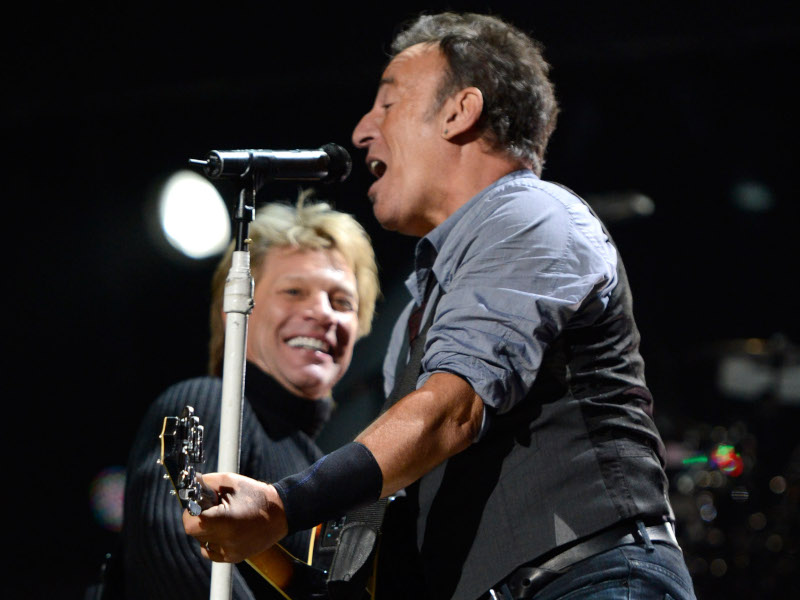 It doesn't get more "New Jersey" than Bruce Springsteen and Jon Bon Jovi popping into Freehold Township's landmark Jersey Freeze for a couple of ice cream cones. The Asbury Park Press reported the pair of rock icons pulled into the hometown favorite of Springsteen's and ordered a pair of cones: "sprinkles for Bon Jovi and chocolate dip for Springsteen."

"The Boss," who's been a lifelong customer, brought Bon Jovi — Sayreville, New Jersey's favorite son — for a quick treat on this past Wednesday (October 5th) when Jersey Freeze owners Matt Cangialosi and Katie DiNonno took a photo with the pair. DiNonno said: "This was me and Matt's first picture with (Springsteen) — we usually don't bother him when he comes. But today it was both of them — there's no way. I'm taking a picture. It was fun."

APP.com reported that during Spingsteen's August 2016 concert at MetLife Stadium in East Rutherford, he pressed the crowd if they were fans of the legendary ice cream parlor, asking, "Who’s been to Jersey Freeze? We’d stop there and it was much smaller. They didn’t have any hot dogs or hamburgers. They only sold ice cream and they sold two kinds: one was chocolate and one was vanilla. Just soft ice cream, that was all you could get. When I was a kid, I didn’t like chocolate or vanilla, I just liked the cones. So the guy used to save all the broken cones for me."

Jon Bon Jovi, has long showed his charitable side in his home state, having opened the JBJ Soul Kitchen in Red Bank, New Jersey, where "customers pay the minimum donation or volunteer in some way to earn a voucher for a meal." Bon Jovi told us that he's more interested in using his career to serve local and global communities than to bolster his ego and bankbook: ["Building a medical clinic, which I did in my hometown, becoming involved in the team to build playgrounds at foster homes and put beds in Covenant Houses and stuff like that, giving money to disaster relief, just giving back. . . That's the kind of stuff that's inspiring me now. It's not about, 'Hey man, we got a new record out. This is a rock band!' Yech!"] SOUNDCUE (:20 OC: . . . rock band yech)