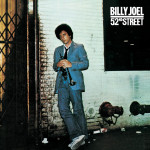 Joel said that after the multiplatinum breakthrough success of The Stranger in 1977, he was kind of under the gun on 52nd Street — “There was a certain amount of pressure to do an album somewhat like The Stranger. But my instinct was to not try to do an album like that and just do what I felt like doing.”

That attitude helped to inspire “My Life,” with the lyrics “I don't care what you say anymore/This is my life.”

The song features backing vocals by Chicago members Peter Cetera and Donnie Dacus, who were recording in the same studio.

Joel chose the 52nd Street title for the album partly as an acknowledgement to the Beatles and their Abbey Road set: “If you listen to that album, there is really no cohesion except for (producer) George Martin sewing everything together. I looked at my album and I thought, 'What do these songs have in common? Nothing, except they were all recorded at the 52nd Street studio.'”

52nd Street was Joel's first Number One album and has sold more than seven million copies.