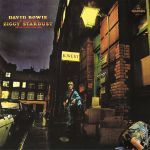 After several years of David Bowie slogging through the pop scene and scoring only minor hits, the Ziggy Stardust album established him as an international star. It's a loose concept album about a fictional rock star and his band, discussing the perks and pitfalls of the music business and stardom.

Bowie also adopted Ziggy as a persona, which he would slip into and out of during interviews and concerts.

Ziggy Stardust also provided the parameters for the first of Bowie's lavish and theatrical stage shows.

Of the album, Bowie said, “I wasn't at all surprised that Ziggy Stardust made my career. I packaged a totally credible plastic rock star — much better than any sort of Monkees fabrication. My plastic rocker was much more plastic than anybody's.”

“Ziggy Stardust” features several references to Bowie fave Jimi Hendrix. Like Hendrix, Ziggy “played it (the guitar) left-hand.” And the lyric, “When the kids had killed the man/I had to break up the band,” is a reference to fans who provided Hendrix with the drugs that would eventually kill him.

Though it's one of the most played radio tracks in Bowie's catalog, “Ziggy Stardust” was never released as a single.