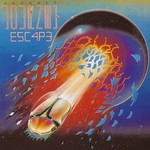 The second single from Escape, “Don't Stop Believin'” peaked at Number Nine on the Billboard Hot 100.

Guitarist Neal Schon came up with the majority of the songs at the group's rehearsal warehouse in Oakland, California, writing the bass riff, the guitar line, and the chorus. Drummer Steve Smith contributed the tom-tom patterns that mark the song's rhythm.

Cain and singer Steve Perry's references to “streetlight people” was inspired by the scene on the Sunset Strip in Los Angeles.

Cain and Perry clearly need a geography lesson, however. One of the song's characters was “born and raised in South Detroit,” but there is no such place.

Escape was Journey's most successful studio album, hitting Number One on the Billboard 200, staying on the chart for 146 weeks, and selling more than nine million copies.

During the Escape tour, Journey left their own headlining dates to open the first show of the Rolling Stones' 1981 North American tour on September 25 in Philadelphia.

Another memorable show on the tour was at the Cow Palace in San Francisco, where the entire roster of the 49ers football team–en route to its first Super Bowl title–joined Journey onstage.