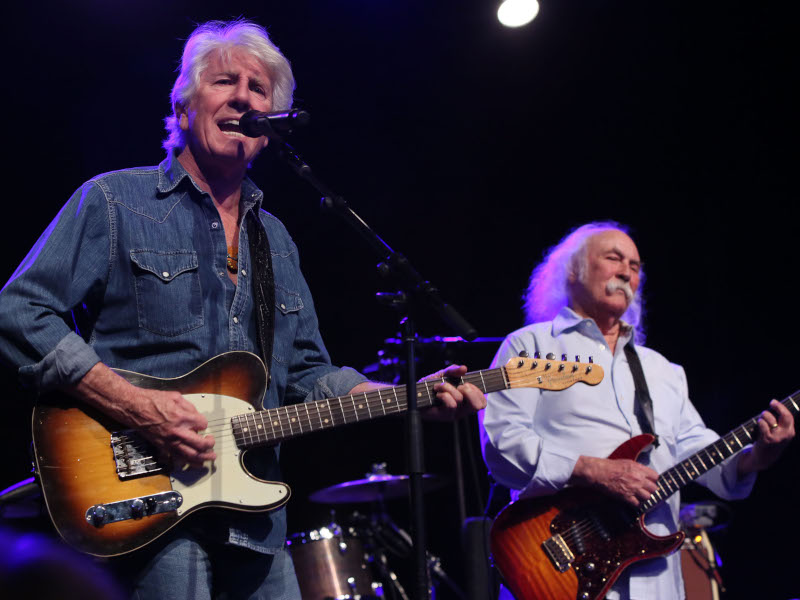 Graham Nash revealed that he's been compiling a new album featuring his and David Crosby's guest appearances through the decades. Nash shed light on the project, telling The San Diego Union-Tribune, “That really is a great album, and I hope it comes out soon. It starts with us singing on (Stephen Stills') 'Love The One You’re With,' then on Jackson Browne‘s 'Doctor My Eyes’ and James Taylor's 'Mexico.' It finishes off with me and David singing 'You’ve Got A Friend’ with Carole King (in 1993) at the Universal Amphitheatre (in Los Angeles).”

When pressed as to whether the collection marks some type of truce in his and Crosby's longtime estrangement, Nash said, “No. This record has been in the works for about five years. I put it together, compiled it and made a great album cover for it. I think anyone who hears it will say: ‘Holy s***, this really is a great record!'” Nash didn't offer up a title or a release date for the collection.

Nash who is still on the outs with Crosby over the issues that led to the likely permanent split between Crosby, Stills, & Nash went on to admit, “The truth is, I do miss David. I think he’s really a great musician, totally unique, and we made a lot of really good music together in our lives. But, as with brothers, sometimes you argue and that (can wreck) your relationship. That’s what happened to David and me. But look at the music we made together.”

Sadly, Graham Nash told us that his public feud with David Crosby came to head during the planning of his recent Over The Years retrospective, when Crosby demanded that a classic Crosby & Nash medley tied together in both history and their fans' musical experience had to be separated: “I can tell you specifically when it was. Remember my song 'Wind On The Water'? Well, the beginning of that was 'Critical Mass' — the beautiful chorale piece that Crosby wrote and we sang, right? And it's always been married to 'Wind On The Water.' Crosby, because he's so pissed at me, one day called my managers and said, 'I refuse to allow Graham to use that song ever again.' So, on this album — you don't hear 'Critical Mass,' it fades up to 'Wind In The Water' from the string part. And that's sad, because you're not (bleep-bleep) with me when you do that, you're (bleep-bleep) with the muse of music — and that's a serious crime to me.”