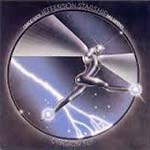 The Jefferson Airplane was still in existence at the beginning of 1974, though largely inactive, as Grace Slick released her first solo album, Manhole.

The hard rocking “Ride The Tiger” was the lead track from the first Starship album, Dragonfly, and quickly became an audience favorite and standard concert opener for the band.

The song, co-written by Kantner, Slick, and a Chinese friend named Byong Yu, spouts the virtues of Eastern philosophy and outlook, championing it as deeper and more meaningful than Western attitudes.

“Ride The Tiger” was also the Starship's inaugural single, peaking at Number 84 on the Billboard Hot 100.

Fans gave the band a warm welcome, and Dragonfly reached Number 11 on the Billboard 200.

Also appearing for one song (“Caroline”) on Dragonfly was Jefferson Airplane co-founder Marty Balin, who had quit the group in 1971. He subsequently rejoined Jefferson Starship full-time.