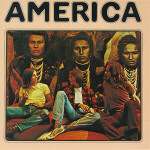 ‘A Horse With No Name’ – America

Though they met at London's Central High School, only one of the three members of America was native to England — Dewey Bunnell, who was born in Yorkshire in 1952.

Their first group together was an acoustic folk-rock band called Daze.

They chose the name America both out of longing for their homeland and as a coincidence while they were listening to a jukebox that had the word Americana on it.

“A Horse With No Name” was America's first single and their first Number One hit, climbing to the top of the chart in March 1972 and staying there for three weeks.

Despite rumors that it was about a drug trip, Bunnell wrote “A Horse With No Name” as an environmental anthem.

Because they were unknowns when the song hit the airwaves, many people mistook Bunnell's nasal voice for Neil Young.

Ironically, the song pushed Young's “Heart Of Gold” out of the Number One spot.

The song was a huge hit in England first, and before it topped the chart in the U.S., the trio undertook a North American tour to considerable indifference. Their first show was in a lunchroom at a college in Ontario.

The America album also spawned the Top 10 hit “I Need You.”

America hit Number One on the Billboard 200 and has sold more than five million copies.

More than 20 years after it was burned into the brains of anyone with a radio, the line in the song about “plants and birds and rocks and things” was co-opted by alternative-rock band the Loud Family, which used it for an album title in 1993.