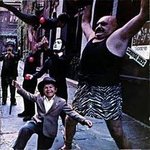 ‘People Are Strange’ – The Doors

Self-deprecating in spots, “People Are Strange” was Jim Morrison's reaction to the way people were treating him and the other members of the Doors — first in Los Angeles and then around the country — as the group became ever more popular.

The song peaked at Number 12 on the Billboard Hot 100, a comedown from the Number One showing of the previous single, “Light My Fire,” but attributable to intense competition in the pop market from the likes of the Beatles, the Rolling Stones, and Jefferson Airplane, among others.

The Doors wrote and recorded the Strange Days album while its predecessor and the single “Light My Fire” were scaling the charts and making the group the hottest new arrival of the year.

After the success of the Doors' debut album, Elektra had advance orders of more than 500,000 copies for Strange Days.

Between the two albums, Sunset Recorders had expanded its recording capacity from four to eight tracks, which gave the Doors greater opportunity to expand its sound.

The Strange Days album peaked at Number Three on the Billboard 200 but was only certified gold, a disappointment after The Doors sold more than a million copies.