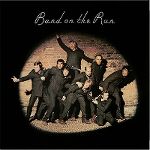 Shortly before departing for Lagos, Nigeria, to record the Band On The Run album, Wings guitarist Henry McCullough and drummer Denny Seiwell left the band. Paul McCartney, his wife Linda, and guitarist Denny Laine decided to make the trip anyway and piece the album together themselves, with help from local musicians.

Former Cream and Blind Faith drummer Ginger Baker owned ARC Studios, one of the two used to record Band On The Run.

The sessions were eventful, and so was the time Wings spent in Lagos. At one point the trio was accosted by threatening street toughs. Linda was convinced that she saved their lives by pointing out that the man with her was “Beatle Paul.”

“Band On The Run” was Wings' top-selling single to that point, selling over two million copies.

The single peaked at Number Two on the Billboard Hot 100 chart.

McCartney says “Band On The Run” actually started with its title. “I had a song called 'Band On The Run.' I was forming the band, we were getting together, and the song, in writing itself, came to that phrase 'band on the run.' I thought, 'That's nice, 'cause if it makes it as a recording, it will be a great album title. It'll be nice, as we're going on tour. We can BE the 'Band On The Run.' It doesn't always mean on the run from the law. 'On the run,' to me, is just like 'band on the road.'”

The Band On The Run album hit Number One in both the U.S. and the U.K. and has sold more than six million copies worldwide.

The album (and song) title was inspired by a George Harrison philosophical remark, “If we ever get out of here,” referring to the idea that we're all prisoners on earth in one form or another