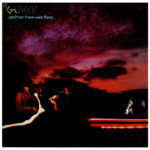 “Follow You, Follow Me” was Genesis's first major hit in the U.S., peaking at Number 23 on the Billboard Hot 100.

It was also the group's first top 10 hit in the U.K., reaching Number Seven.

” Follow You, Follow Me” is also a group composition, which was rare for Genesis at that time.

Keyboardist Tony Banks remembers, “We weren't thinking in terms of a single at all, at the time. We were just jamming…and suddenly realized that it would make a really good single. We had thought that so many times in the past, but it had never proved to be the case. As it happened, our producer David Hentschel didn't like the song at all, and it almost got shelved.”

With punk rock raging around them and many of the punks targeting Genesis among the bands they were rebelling against, the group tried to keep the songs on And Then There Were Three… shorter and more direct, according to guitarist-bassist Mike Rutherford: “We were trying to prove ourselves… We'd said to ourselves, 'Let's keep some of the songs a bit shorter this time, so we can get slightly more variety.' That made for a certain sort of album.”

In fact, And Then There Were Three… is generally considered one of Genesis's slightest albums. Even singer-drummer Phil Collins noted, “It's not one of my favorite albums.”

Nevertheless, it was successful, hitting Number 14 on the Billboard 200 and earning Genesis its first platinum album. In the U.K. the album hit Number Three.

As the title indicates, And Then There Were Three… was also Genesis's first album as a trio. Guitarist Steve Hackett had left the band in the summer of 1977, as Genesis was mixing its live albumSeconds Out.