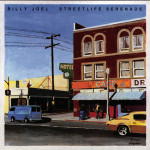 One of Billy Joel's most recognized anthems, “New York State Of Mind” was never a hit single though it remains one of his most popular songs.

Joel has explained that he came up with the song while he was living in Los Angeles in the early '70s, performing in lounges under the name Bill Martin. When the U.S. government turned down New York City's request for financial assistance, Long Island native Joel wrote the song as a kind of response and to express his solidarity with the city.

He was also inspired to move back to New York, where he began pursuing his recording career in earnest.

Streetlife Serenade and all of Joel's releases until the early '90s contain the Romulus & Remus logo of Family Products, as a concession to Joel's original manager, Artie Ripp.