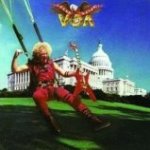 Monterey, California-born Sammy Hagar was the son of a boxer but has always claimed that at a meeting with Elvis Presley, “The King” urged him to go into music rather than athletics.

Hagar came to prominence in 1973 with the band Montrose, which he left in 1975 to start a solo career that was interrupted by a stint fronting Van Halen from 1985-96.

“I Can't Drive 55” is a rebellious anthem positing the idea that Hagar, like many others, can't possibly hold to a speed limit he deems to be too slow.

The song was a massive rock radio hit that reached Number 26 on the Billboard Hot 100 in the fall of 1984.

One particularly memorable performance of “I Can't Drive 55” came during the first Farm Aid concert in September 1985, when Hagar was joined by future bandmate Edward Van Halen.

Hagar's VOA album — the title stands for “Voice Of America” — was a million-seller that reached Number 32 on the Billboard 200.

VOA was also Hagar's last solo album before joining Van Halen, though his contract with Geffen required him to record another one for the label, which became 1987's Sammy Hagar.