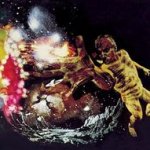 ‘Everything Coming Our Way’ – Santana

The first single from Santana's third album, the optimistic “Everything's Coming Our Way” hit Number 12 at the peak of a 10-week run on the Billboard Hot 100 chart.

Santana III was the first of the group's albums to feature its newly expanded lineup, with Neal Schon as the second guitarist and percussionist Coke Escovedo, who came as a fill-in for an ailing Jose Chepito Areas, staying on when Areas returned.

Carlos Santana feels that Santana III represented a great growth in the group's sound. “By the third album, we had improved as musicians and as people,” he says. “Our first album, we were right out of high school. I only knew about my passions for B.B. King and Gabor Szabo. By the second album, I became aware of making my own music. It took me awhile to realize that all the things I learned from Miles Davis and John Lee Hooker — you have to compress it and make your own carrot juice.”

The fans apparently agreed — Santana III was the group's second consecutive Number One album on the Billboard 200, spending five weeks there and selling more than two million copies.

Santana III was also the final hurrah for the original Santana band, as several members departed during the fall and winter of 1971.

Gregg Rolie, who was among those who left, says the first three Santana albums always stand apart from anything that was recorded after them. That body of work, he says “was truly done as a band, where it almost didn't matter to what degree what anyone brought to the table, whether it was 10 percent or 80 percent — it had such impact. The way the band played, the sum of the parts was greater than any individual, even though there were people who stood out. You put it together, and it was something unbelievable, and it always seemed to continue on.”