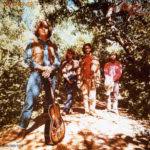 Creedence Clearwater Revival fashioned its Bayou-influenced, rootsy swamp sound in San Francisco, where the band was based after its initial formation in El Cerrito, California, in 1959 as Tommy Fogerty & the Blue Velvets.

Among its 60s (and early 70s) counterparts, CCR easily stands as the most effective singles band of the era. The armload of hits the group amassed in a mere couple of years reads like a roll call of rock history: “Proud Mary,” “Green River,” “Fortunate Son,” “Down On The Corner,” “Lookin' Out My Back Door,” and many more.

Of these, “Bad Moon Rising” is perhaps the second most popular, just a notch behind the bar mitzvah band favorite “Proud Mary.” It hit Number Two in 1969 and has remained on FM rock radio playlists ever since.

What gave the song its legs? Like the rest of CCR's songbook, “Bad Moon Rising” was out of step with the indulgent jams, flower power, and psychedelic flavor inherent to the Bay Area music scene during the late 60s. CCR instead stuck to compact melodies, tight song structures and a rigid adherence to the essence of rock & roll roots.

The tune may be cheery, but like much of John Fogerty's writing, the lyric was somber and forewarning.

The lines “Don't go out tonight/It's bound to take your life” may have been an overstatement, but not by much. By the early '70s, the dark shadow of President Richard Nixon (who reportedly was the “inspiration” for the song) and the Watergate tapes, the Kent State murders, plus the continuing debacle of Vietnam, gave the song's prophetic message an extra ring of authority.

The song's call to the masses, like the working-class nature of the band's overall approach and aesthetic, made the music available to anyone and everyone.

The appeal of the song has spread to artists as diverse as Queen Ida & Her Zydeco Band and Reeves Gabrels of Tin Machine, both of whom have released versions of it.

It's been used in soundtracks for movies such as An American Werewolf In London and My Girl.