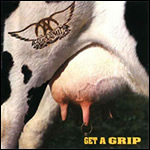 “Crazy” was the fourth single released from Aerosmith's Get A Grip album. It reached Number 17 in the U.S. and Number 23 in the U.K.

“Crazy” won the Grammy Award for Best Hard Rock Performance By A Duo Or Group at the 1994 ceremony.

While “Crazy” was one of the first songs written for Get A Grip, it was one of the last to be recorded. “We weren't sure if it was going to make it,” said guitarist Brad Whitford. “I had to use charts in the studio because I hadn't learned the chord changes. It just goes to show you — you never know what's gonna stick to the wall.”

Lead guitarist Joe Perry acknowledged that he found the song “too sappy and lightweight,” but said, “We went with it because it had a lot of classic changes and cool vocals.”

Get A Grip was Aerosmith's first Number One album and sold more than six million copies. It reached Number Two in the U.K.

Aerosmith had recorded an early version of the album in 1992 at A&M Studios in Los Angeles, but it was rejected by their label. The band was urged to go back to Vancouver, British Columbia, and work again with producer Bruce Fairbairn, who had produced Get A Grip's predecessor, Pump.

Prior to finishing Get A Grip, Aerosmith announced that it had re-signed with its original label, Columbia Records, and would be leaving Geffen after one more album (plus a hits collection and live set).