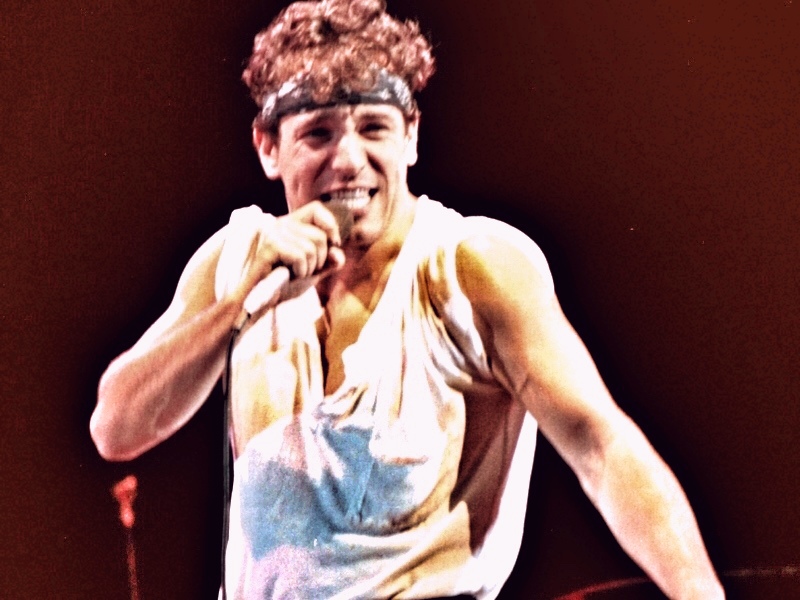 It was 36 years ago today (November 10th, 1986) that Bruce Springsteen & The E Street Band released their 40-track, five-record, set Live 1975/85. The album spanned the group's touring career from their 1975 Roxy Theatre performance in Los Angeles, to the sold-out stadium dates of the then-recent Born In The U.S.A. world tour. In addition to the five LP's, Live 1975/85 was also issued as a three cassette and three CD set. The album — which was the first to give the E Street Band equal billing — shipped platinum with advance orders for over 1.5 million copies. Live 1975/85 became the first album since Stevie Wonder's 1976 set Songs In The Key Of Life to debut at Number One. The album has since been certified 13-times platinum.

The album wasn't without controversy, with fans objecting to the mix, which had triggered drum sounds for aural consistency and a mid-'80s sameness throughout — despite the band's evolving sound which was recorded at a variety of different venues. Fans also had a problem with some of the tunes being truncated after hearing the uncut performances on bootleg. The fact that most of the performances sprang from Springsteen's New Jersey or Los Angeles runs particularly rankled fans who were aware that some of the band's hottest shows weren't all hometown gigs. Many complained at the time that the set was top heavy with live versions of the mammoth Born In The U.S.A tracks — which had already reached saturation airplay since it's June 1984 release.

The album spawned two singles — a cover of Edwin Starr's 1970 hit "War" which hit Number Eight and Springsteen's first release of "Fire" — which the Pointer Sisters brought to the Top 10 in 1978. The single flopped, reaching only Number 46 and broke "The Boss'" string of eight straight Top 10 hits.

Springsteen explained that hitting the stage primed to excite and entertain is a huge part of what great live music is about: ["It's the 'showtime' — y'know, I think people are frightened of the word 'show' sometimes, but that's what it is. And also, I think it's perceived when you say 'show' for some reason, it gets mixed up with the idea that it's false. But really, it's just a series of tools that allow you to communicate what you're trying to say to the audience, y'know? It's a bridge to the audience when employed correctly. And I love all my favorite entertainers — they were serious, they were clowns, and they did all kinds of — they were showmen, and that's just a part of our background. And it was essential when you played in a lot of bars in New Jersey where the audiences could be hostile."] SOUNDCUE (:36 OC: . . . could be hostile)

Drummer Max Weinberg reflected on the era-defining 1984-1985 Born In The U.S.A. tour, which spanned the globe over the course of 156 shows: ["The record was a big hit — the ('Dancing In The Dark') video had a lot to do with that. Suddenly, 75 percent of our audience at the concerts were guys — now, it was a preponderance of girls and women at our shows. And Bruce, certainly, turned into a video star; I'm not sure he altogether felt comfortable with that role, but we were on a tour and the tour took on a life of its own. We did about 170 shows all around the world. It was a fabulous experience because we had finally gotten to the place we always wanted to be — in terms of putting on a show, playing big places — it was quite a time."] SOUNDCUE (:31 OC: . . . quite a time)

On November 10th, 1998 — 12 years to the day of Live 1975/85's release — Bruce Springsteen released his then-career-spanning outtakes collection Tracks. The 66-track, four-disc set included selections from his 1972 artist audition for Columbia Records, outtakes from nearly all his albums, and a smattering of rare B-sides. Tracks peaked at Number 27 on the Billboard 200 album charts. Following the release, Springsteen and the reunited E Street Band hit the road for their first tour in over a decade.

Steve Van Zandt told us considers the discarded material from the sessions for 1980's The River among the best music the E Street Band ever laid down on tape: ["Every single outtake on The River was a lost argument. I was fighting for every single one of ‘em, y’know? I mean, he wrote, basically, three fantastic albums. Y’know, and we put out a double album, but there was that whole outtake album, which is the best E Street Band album, ever — on Disc Two of Tracks — and now, they found another, whatever it is, eight or 10. . . and wait ’til you hear the quality of these things. You cannot believe the quality!”] SOUNDCUE (:27 OC. . . believe the quality)

Making good once again on the 12-year November box set cycle, on November 16th, 2010 Springsteen released his third multi-disc archival collection, The Promise: The 'Darkness On The Edge Of Town' Story box set.

The collection features the first remastered version of the Darkness album, along with two CD's of previously unreleased outtakes, an 80-page notebook, three DVD's — featuring The Promise: The Making Of 'Darkness On The Edge Of Town' documentary; a private 2009 E Street Band performance of the Darkness album in its entirety; various footage of Springsteen in concert and rehearsal with the band from 1976, '77, and '78; and the full in-concert video feed of the December 8th, 1978 concert at Houston's The Summit.