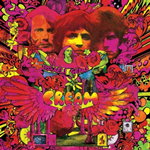 ‘Sunshine Of Your Love’ – Cream

The band was hailed as rock's first supergroup and defined the power trio format. According to Clapton biographer Ray Coleman, “They made musicianship hip.”

For Clapton, it was Cream more than any of his previous bands that established his stature as a guitar hero and led to “Clapton is God” graffiti springing up around England. “All during Cream I was riding high on the 'Clapton is God' myth that had been started up,” he said. “Then we got our first kind of bad review…in Rolling Stone. The magazine ran an interview with us in which we were really praising ourselves, and it was followed by a review that said how boring and repetitious our performance had been. And it was true!…I immediately decided that that was the end of the band.”

“Sunshine Of Your Love” was Cream's biggest hit, peaking at Number Five in the U.S. and selling more than a million copies.

The Disraeli Gears album was a million-seller that hit Number Four on the Billboard 200 chart.