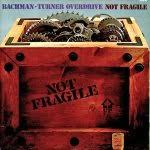 ‘You Ain’t Seen Nothing Yet’ – Bachman-Turner Overdrive

Not Fragile was the group's biggest album, and their only one to hit Number One as well.

The song's stuttering chorus was inspired by Randy Bachman's brother Gary, who had a speech impediment. Many took it as a copy of, or homage to, the Who's “My Generation.”