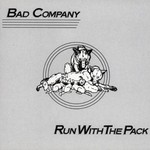 ‘Run With The Pack’ – Bad Company

The title track of Bad Company's third album, “Run With The Pack” is a male-bonding type of song that frontman Paul Rodgers was inspired to write about the group's non-stop touring adventures.

“Run With The Pack” is notable for its string arrangement, which Rodgers said he had in mind from the outset. “I wrote that song on the piano, and when I played it to the guys they fell right in. In my head, strings were always part of the song.”

Jimmy Horowitz arranged the strings, and Rodgers recalls, “Jimmy came to the session with tape recorder in hand and, while the track was playing, asked me how I wanted the strings in the background. I sang the part that I had been hearing in my head, and he went off and wrote it up.”

Guitarist Mick Ralphs says that hearing a Bad Company song performed by an orchestral string section was overwhelming. “I shall never forget mixing the song with (engineer) Eddie Kramer. We both had all hands on the desk and were riding about 36 faders, trying to do a mix all in one take and get all of the parts at the right intensity. In the end, we had to do it in two bits, as it was just too much.”

“Run With The Pack” was not released as a single but has become the most enduring track from its parent album.

The Run With The Pack album reached Number Five on the Billboard 200 and Number Four on the U.K. chart.