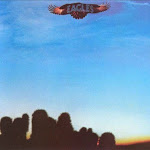 Recorded: February and March 1972 at Olympic Sound Studios in London

Before landing a recording contract, the group made a name for themselves by playing the various Sunset Strip clubs in Los Angeles.

“Peaceful Easy Feeling” was written by Jack Tempchin, whom Frey befriended after they met at the Troubadour in Los Angeles.

It sounded to some people like a slowed-up alternate version of Jackson Browne's “Take It Easy,” which was the Eagles' first single, and helped to define not only the group's sound but also the laid-back, acoustic-tinged L.A. rock scene.

“Peaceful Easy Feeling” was the group's third single and peaked at Number 22 on the Billboard Hot 100 chart.

The recording of their first album in England was fraught with arguments between the band and producer Glyn Johns. The group — particularly Frey and Henley — wanted more of a rock sound, while Johns wanted to play up the country element. Henley said, “The sound he was creating for us wasn't powerful. Glyn had this image of us as a ballad group… He was a complete tyrant. We were really young and green and he just lorded it over us… And he had worked with all the heavies, so we couldn't argue.”

The cover of Eagles was shot at Joshua Tree National Park, and Leadon remembered that before the session, “We met at the Troubadour at one in the morning, just drank our faces off, all the pot and dope we could find, and we went out in my Toyota Jeep and somebody else's car and drove off to Joshua Tree… We made a fire and a camp and began making peyote tea and trying to eat peyote without throwing up… Those pictures were pretty well stoned.”

Eagles peaked at Number 22 on the Billboard 200 chart and has been certified platinum.