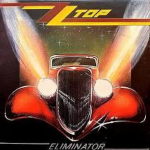 “Gimme All Your Lovin” – ZZ Top

“Gimme All Your Lovin”' marked a number of firsts for ZZ Top. It was the first track recorded for the Eliminator album, the first single released from the album, and their first video.

The car featured in the video for “Gimme All Your Lovin'” — and several subsequent videos, including “Sharp Dressed Man” and “Legs” — is a modified 1933 Ford three-window coupe. It has been dubbed The Eliminator and is a genuine race-ready hot rod.

“Gimme All Your Lovin'” only spent three weeks in the Top 40, peaking at Number 37. However, it's become a fan favorite, and the video made singer-guitarist Reverend Billy F. Gibbons, singer-bassist Dusty Hill, and drummer Frank Beard MTV stars. The stylish clip showed the band as magical arbiters of cool who offer the keys to the car (and to scoring with a trio of hot babes) to a handsome young man.

Eliminator peaked at Number Nine on the Billboard 200 chart, where it remained for more than three-and-a-half years, and it's sold well over 10 million copies.