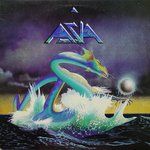 ‘Heat Of The Moment’ – Asia

Recorded: Late 1981 at the Townhouse in London

Asia was formed in 1981 by progressive rock veterans Steve Howe and Geoff Downes from Yes, Carl Palmer from Emerson, Lake, & Palmer, and John Wetton of King Crimson, Roxy Music, Uriah Heep, UK, and others. Downes also was a member of the Buggles.

From the beginning, the group members announced their desire for more commercial success than their previous bands.

They got it with their first single “Heat Of The Moment, ” a massive hit that reached Number Four on the Billboard Hot 100 and Number 46 in the U.K.

The Asia album, which featured cover art by Yes collaborator Roger Dean, was even more successful, hitting Number One on the Billboard 200 and Number 11 in the U.K.

Asia has sold well over four million copies in the U.S.