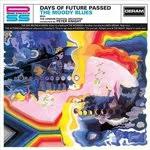 The Moody Blues split up in October 1966, re-forming the following month, prior to recording “Nights In White Satin.”

Originally recorded as a demo to show off Decca Records’ new stereo technology, “Nights In White Satin” was initially hated by the label's executives, who never planned to release it.

Drummer Graeme Edge says the band was originally contracted by Decca to cobble together a classical rock version of Dvorak's “Symphony Number Nine,” but the group always intended to use money provided by Decca to record its own compositions, including “Nights In White Satin.”

Though an instant hit in England, “Nights In White Satin” didn't catch on in America until 1972 – when it hit Number Two – courtesy of a pot-smoking DJ. According to Edge, “This guy was on the graveyard shift and he needed to smoke a bong. He saw a song that clocked in at over four minutes and played it. He played it every night to go do his business, and the switchboard lit up.”

The London Festival Orchestra was, in fact, a group of session musicians around London hired specifically for the one studio date. The Moodies recorded all their songs sans orchestra, while Knight composed and recorded the orchestrations later.

The poem at the end of “Nights In White Satin” is actually another composition called “Late Lament,” written by Edge and spoken by keyboardist Mike Pinder.

Just before the big crescendo after “Late Lament,” there is a sound that resembles glass breaking. Depending on which bandmember you ask, either a cat in the studio knocked over a treebell, or the percussionist did it. In either case, the group decided to leave the accident on the track.