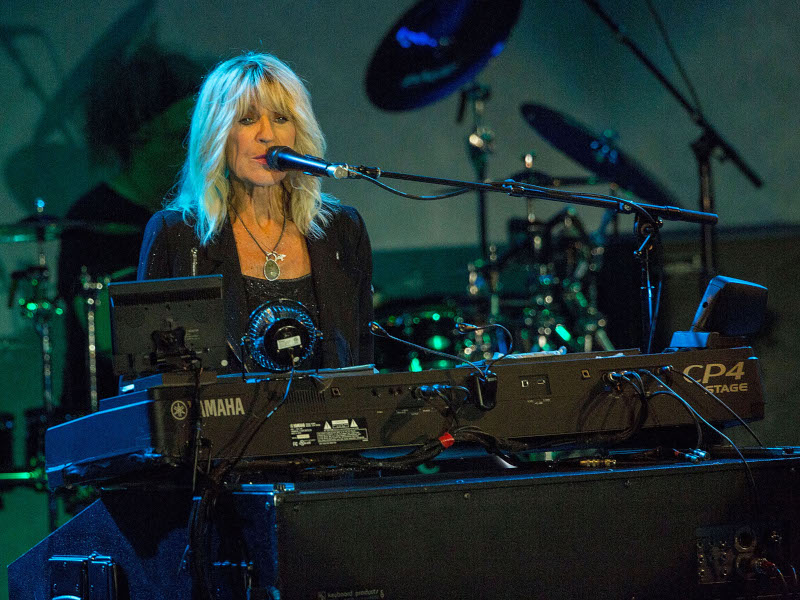 A message was posted announcing her passing on her Instagram page, which reads: "On behalf of Christine McVie's family, it is with a heavy heart we are informing you of Christine's death. She passed away peacefully at hospital this morning, Wednesday, November 30th, 2022, following a short illness. She was in the company of her family. We kindly ask that you respect the family's privacy at this extremely painful time, and we would like everyone to keep Christine in their hearts and remember the life of an incredible human being and revered musician who was loved universally. RIP Christine McVie."

Fleetwood Mac posted their own tribute, stating, "There are no words to describe our sadness at the passing of Christine McVie. She was truly one-of-a-kind, special and talented beyond measure. She was the best musician anyone could have in their band and the best friend anyone could have in their life. We were so lucky to have a life with her. Individually and together, we cherished Christine deeply and are thankful for the amazing memories we have. She will be so very missed."

Stevie Nicks tweeted a handwritten letter, which reads in part: "A few hours ago I was told that my best friend in the whole world since the first day of 1975, had passed away. I didn’t even know she was ill. . .  until late Saturday night. I wanted to be in London; I wanted to get to London — but we were told to wait. So, since Saturday, one song has been swirling around in my head, over and over and over. I thought I might possibly get to sing it to her and so, I’m singing it to her now. I always knew I would need these words one day (Nicks quoted lines from 'Hallelujah' by Haim). See you on the other side, my love. Don't forget me."

Drummer Mick Fleetwood, the heart and soul of the group, posting his own loving tribute to McVie, writing, "This is a day where my dear sweet Friend Christine McVie has taken to flight. . . and left us earthbound folks to listen with bated breath to the sounds of that 'song bird'… reminding one and all that love is all around us to reach for and touch in this precious life that is gifted to us. Part of my heart has flown away today. . . I will miss everything about you Christine McVie Memories abound. . . they fly to me."

Back in 2017, McVie and now-ousted Mac bandmate Lindsey Buckingham released their debut album as a duo, Lindsey Buckingham / Christine McVie, which peaked at Number 17 on the Billboard 200 and formed the basis of their first joint tour together.

In 2014 McVie thrilled the rock world when she returned to the band following a 16-year hiatus. McVie, along with former husband John McVie and Mick Fleetwood, steered the group through a diverse early-'70s period following the absence of the group's co-founding guitarists Peter Green and Jeremy Spencer. After the eventual departure of key members Danny Kirwan and Bob Welch — and the addition of Lindsey Buckingham and Stevie Nicks — McVie suddenly became one of the three hottest songwriters of the 1970's. In the latter part of the '70s, she was romantically involved with legendary Beach Boys' drummer Dennis Wilson.

McVie's songs played a crucial role in the band's blockbusters Fleetwood Mac, Rumours, Tusk, Mirage, and Tango In The Night. Among the standards she wrote for the band were: "Over My Head," "World Turning (co-written with Buckingham)," "Warm Ways," "Sugar Daddy," "Say You Love Me," "Don't Stop," "Songbird," "Oh Daddy," "You Make Loving Fun," "Think About Me," "Over And Over," "Hold Me," "Love In Store," "Little Lies," and "Everywhere," among others.

Christine McVie told us that the members of Fleetwood Mac are connected by a bond that transcends time and distance: [“I just think that there’s an inextricable chemistry between the five of us, which will never go away, because that just is what it is, y’know, until we’re 90 it’ll be there. No matter how far we go apart in our different spheres of music, when we get together, it’s just something that, y’know, sparks fly.”] SOUNDCUE (:17 OC: . . . y’know sparks fly)

Lindsey Buckingham credits Mick Fleetwood for wooing Christine McVie back into the band: [“I am not aware of how much they were writing or talking about it, and I don’t know what agenda Mick may or may not have had our what he felt he was going to be able to accomplish. All I know is that he felt very strongly that Christine had been, perhaps, sequestered away, a little too much over there for a little too long — for reasons that even I’m not even that clear on myself.”] SOUNDCUE (:24 OC: . . . clear on myself)

Not too long ago, Buckingham told us that there is no way one can deny the absolute chemistry between the classic ‘70s lineup of Fleetwood Mac: [“It’s an intangible thing. It’s a very strong aspect of what I always thought was, kind of, for lack of a better term, the whole being greater than the sum of the parts, which was always the part of theory of this fivesome; and was very apparent when we first started rehearsing before doing that first album in 1975, was that there’s something afoot here.”] SOUNDCUE (:19 OC: . . . something afoot here)

In 2003 McVie was credited as an additional musician on Fleetwood Mac's last full-blown studio set, Say You Will. She contributed keyboards and backing vocals on "Bleed To Love Her" and "Steal Your Heart Away." In 2004 McVie released her third solo album, In The Meantime, which she collaborated on with her nephew, Dan Perfect.

Christine McVie told us that her leaving Fleetwood Mac and eventually rejoining the band were very carefully thought out decisions and not done without deep and heartfelt consideration: [“I told the band when we were doing The Dance tour that that would be my last tour, and they knew it. It was no surprise to anybody. It was not out of any lack of love for these guys, they’re, y’know, they’re my musical family. I think everybody has to do their little journeys and do what they have to do. Y’know, Lindsey (Buckingham) left the band for a while, I just realized that I made a huge mistake, but it took me about 10 years to realize it, that’s all. And I started missing them and playing with them.”] SOUNDCUE (:27 OC: . . . playing with them