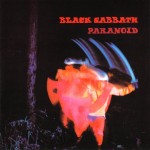 Inspired by the Marvel comic-book hero of the same name, “Iron Man” was a belated single from Black Sabbath's Paranoid album, issued after the release of the band's next album, Master Of Reality.

The song was successful nevertheless, hitting Number 52 on the Billboard Hot 100 in the spring of 1972.

The album hit Number 12 on the Billboard 200, while it topped the U.K. charts — a remarkable feat given a lack of airplay for any of the album's songs.

The band wanted to title the album “War Pigs,” but Warner Brothers executives in the U.S. felt that the title might be a liability in the midst of the Vietnam War. But the decision to change the title toParanoid came too late to alter the original cover art of a blurred, sword-waving warrior.

One of the great Black Sabbath myths to surface around the time Paranoid was released is that a chief witch named Alex Saunders placed a spell on the band that protected it as long as the musicians wore crucifixes. This was supposedly to counter a curse the group suffered when it turned down an offer to play at Stonehenge.