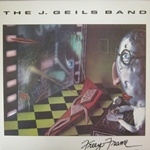 “Centerfold” was the J. Geils Band's breakthrough single, hitting Number One in early 1982.

The song was inspired by a friend of drummer Stephen Jo Bladd, who one day opened a pornographic magazine to find a former high school sweetheart was the centerfold. Bladd told the story to keyboardist Seth Justman, who turned it into a song.

The success of “Centerfold” was partly due to the then-new MTV. Hungry for videos to air, the cable channel gave heavy play to the song's clip, which featured the members of the band performing amid a sea of cheerleaders in a high school hall and classroom.

The single's success helped the Freeze-Frame album become the most successful of the group's 14-year career. It peaked at Number One and spent 70 weeks on the Billboard 200 chart.

It also won the band a following in Europe, where they opened for the Rolling Stones in the summer of 1982.

Frontman Peter Wolf said timing played a big part in the success of Freeze-Frame: “People were hungry for a rock-and-roll band. People wanted new, funky, sweaty rock-and-roll. The clubs that had been discos started getting back into rock-and-roll. Between the emergence of MTV, the song 'Centerfold' itself, and EMI being at an aggressive stage, that all came together for us.”

The group's dynamic live show also helped, according to Justman: “A lot of young kids saw us for the first time, and they could see we were having a ball.”