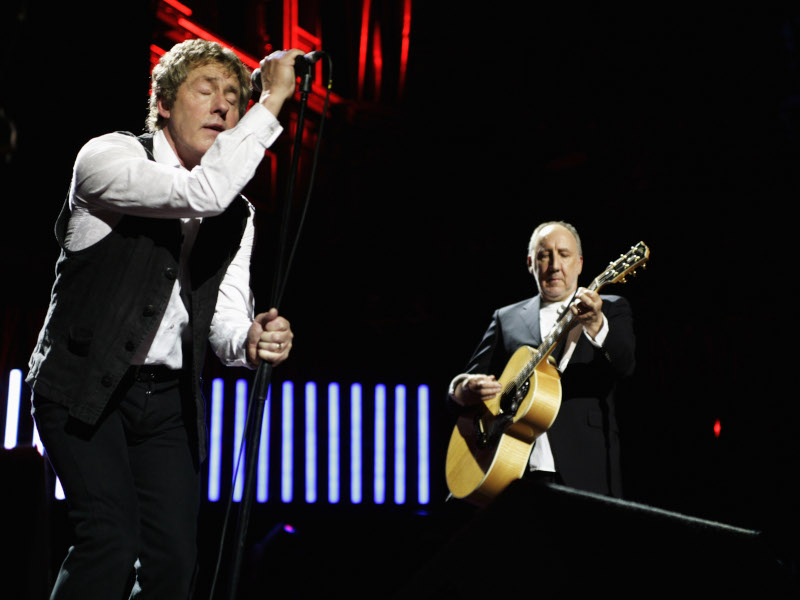 The Who Goes Acoustic In London For Charity

A scaled-back and primarily acoustic Who performed on Friday night (December 2nd) as part of 90th birthday salute to legendary artist, Peter Blake. Blake, who is considered the “Godfather” of pop art, is perhaps best known for designing the cover of the Beatles' groundbreaking 1967 Sgt. Pepper's Lonely Hearts Club Band album, among countless other albums and projects — including the Who's iconic 1981 cover for Face Dances — and most recently, 2019's WHO. Proceeds from the performance at London's Royal Festival Hall went to towards the Who's patron charity Teenage Cancer Trust and Graeae Theatre Company.

The Who performed a seven-song set, featuring Roger Daltrey and Pete Townshend on acoustic and electric guitars, with the pair accompanied by Townshend's brother and longtime bandmate Simon Townshend on acoustic guitar, touring bassist Jon Button, longtime Who associates Jody Linscott on percussion and Billy Nicholls on backing vocals. Also appearing at the event was the Pretenders' Chrissie Hyde, Noel Gallagher, Paul Weller, and others.

Townshend and Daltrey took part in a brief discussion on stage during the latter part of the concert.

During his and Roger Daltrey's brief chat during Friday night's tribute, Pete Townshend spoke about how Peter Blake revolutionary use of color inspired him in the mid-1960's: “Peter will remember this, I can't remember which magazine it was. But I think it was the Sunday Times cover supplement. It had a piece about pop art, I pulled out all of the sheets and I had it all up in my bedroom. Very, very colorful, wonderful stuff that I still love to this day.”

The Who's setlist on Saturday night in London was:

The Who will again perform acoustically on December 13th at London's St. Luke’s Church in London. All proceeds from the show will benefit Nordoff Robbins and the music therapies it supplies to challenged children.