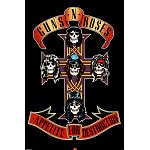 After spending a year building a following in hard rock circles, “Sweet Child O' Mine” was the song that pushed the Los Angeles quintet Guns N' Roses into the pop mainstream, hitting Number One on the Billboard Hot 100 in September 1988.
The song hit Number 24 on the U.K. chart.
“Sweet Child O' Mine” was inspired by frontman Axl Rose's then-girlfriend, Erin Everly, the daughter of the Everly Brothers' Phil Everly. Rose recalled that “I had written this poem, reached a dead end with it and put it on the shelf. Then Slash and Izzy (Stradlin) got working together on songs and I came in, Izzy hit a rhythm, and all of a sudden the poem popped into my head. It just all came together. A lot of rock bands are too… wimpy to have any emotion in any of their stuff unless they're in pain. It's the first positive love song I've ever written, but I never had anyone to write anything that positive about, I guess.”
Geffen insisted on editing “Sweet Child O' Mine” from six to four minutes for the single, which angered Rose. “I hate the edit of 'Sweet Child O' Mine,'” he told Rolling Stone magazine. “Radio stations said, 'Well, your vocals aren't cut.' My favorite part of the song is Slash's slow solo; it's the heaviest part for me. There's no reason for it to be missing except to create more space for commercials so the radio station owners can get more advertising dollars. When you get the chopped version… you're getting screwed.”
Despite the sweetness of the song, Rose has acknowledged that his relationship with Everly was “extremely volatile.”
“Sweet Child” was named Favorite Heavy Metal/Hard Rock Single at the 1989 American Music Awards. It also won the Best Heavy Metal Video award at the 1989 MTV Music Video Awards.
Thanks to the commercial doors opened by “Sweet Child,” GNR's debut album, Appetite For Destruction, reached Number One on the Billboard 200 and has sold more than 15 million copies.