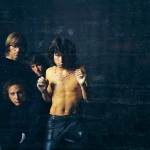 ‘Break On Through (To The Other Side)’ – The Doors

The Doors formed in 1965 in the Los Angeles area after Florida transplant Jim Morrison met keyboardist Ray Manzarek in the UCLA Theater Art Department. Manzarek recruited fellow studentJohn Densmore, whom he met at a Transcendental Meditation course, and Densmore brought in Robbie Krieger, who he'd played with in a band called the Psychedelic Rangers.

Morrison named the group The Doors, inspired by William Blake's poem “The Doors: Open and Closed:” “There are things that are known and things that are unknown/In between are doors,” and the Aldous Huxley book, The Doors Of Perception.

The lyrics deal with the desire to “break on through to the other side” of perception and consciousness, a theme in sync with the late '60s pop counter-culture.

“Break on Through” was the group's first single; it received some airplay but did not chart.

Thanks to the chart-topping second single, “Light My Fire,” the Doors' debut album was a smash, peaking at Number 2 on the Billboard Top 200 and selling more than two million copies.