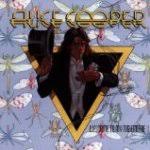 ‘Welcome To My Nightmare’ – Alice Cooper

The second single from the album of the same name, “Welcome To My Nightmare” reached Number 45 on the Billboard Hot 100 chart in the fall of 1975.

Alice Cooper says the song was designed to be the thematic centerpiece of a lavish theatrical concept he had in mind while recording the album: “I needed a song to literally set the stage for the nightmare. We wanted something creepy yet jazzy; Alice gives Broadway a nightmare.”

Co-writer Dick Wagner recalls that “Nightmare” was “sparked by a hurricane…There were steady 70-mile-an-hour winds blowing up from the beach as Alice and I sat in our lawn chairs, and I started playing the opening riff and chords on my acoustic guitar. Suddenly Cooper sings, 'Welcome To My Nightmare, I think you're gonna like it….'”

The Welcome To My Nightmare project was Cooper's first effort after disbanding his original group in the early part of 1974.

Welcome To My Nightmare hit Number Five on the Billboard 200 and sold more than a million copies. The album reached Number 19 on the U.K. chart.

The album was released on Atlantic Records while Cooper was in the process of negotiating a new deal with his longtime home, Warner Bros.

Welcome To My Nightmare was accompanied by Cooper's most elaborate stage production ever, a spectacle financed by Cooper and his manager, Shep Gordon, which was preserved on a home video and, now, DVD version of the concert.

Cooper met his wife on the Nightmare tour–she was a dancer in the stage production. They live in Phoenix, Arizona, with their three children.