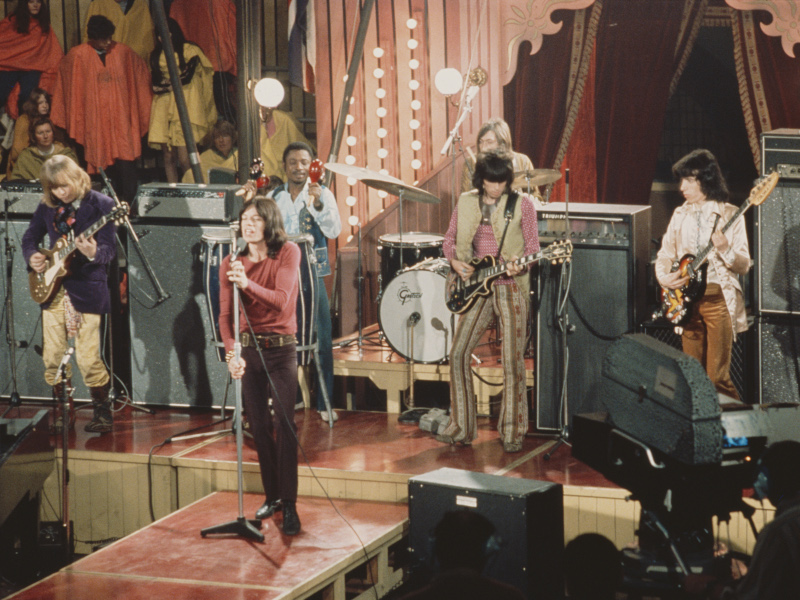 Flashback: The Rolling Stones, John Lennon, Eric Clapton, & The Who Film ‘The Rock And Roll Circus’

It was 54 years ago Sunday (December 11th, 1968) that the Rolling Stones and friends wrapped their two-day film shoot of their Rock And Roll Circus at London's Twickenham Studios. The Circus was originally envisioned as being a holiday TV special for the Stones to promote their latest album, Beggars Banquet, and featured the band's final performance with Brian Jones, along with along with performances by the Who, Jethro Tull, Marianne Faithfull, Taj Mahal, and the Dirty Mac — a one-off supergroup with John Lennon, Eric Clapton, the Stones' Keith Richards, and Jimi Hendrix Experience drummer Mitch Mitchell.

Not only was it Lennon's first gig apart from the Beatles, it was also his first live appearance with Yoko Ono, when she joined the Dirty Mac for an impromptu jam.

Many reasons have been given as to why the Stones eventually shelved the show — but the main one seems to be that the Who was reaching the peak of their performing career and were caught while limbered up from an exhausting series of UK dates. Simply put, the Stones' ragged set was completely upstaged by Lennon's first solo performance and the Who's incredible run-through of their 1966 mini-opera “A Quick One While He's Away.” To underline the fact that the Stones were not at their best, plans were in motion shortly after for the Who to purchase the rights to the special and release it as The Who's Rock And Roll Circus.

Pete Townshend and Roger Daltrey were recently asked what they remembered about the Who performing on the TV special: (Daltrey): “Um, Brian Jones walking backwards most of the time. . . (Townshend): He was sick . . . (Daltrey): He was in reverse, he was in a very sad state. So it was kind of the last time I ever saw Brian Jones, which was incredibly sad. But all in all, it was chaotic event that turned out incredibly successful. (Townshend): And Yoko Ono. . . (Daltrey): Oh yeah, and Yoko was there and John (Lennon) had just broken up with his first — it was quite an event. (Townshend): I'm one of the select Yoko Ono fans (laughter). No but I really am a fan. I think she's amazing (Daltrey): Yeah, she's an amazing woman, that's for sure.”

Director Michael Lindsay-Hogg recalled capturing the Stones' defining moment in the show at a time when the band and crew's energy was nearly gone: “When we did 'Sympathy For The Devil,' there were, like, half-done takes before but they were exhausted. And then Mick (Jagger) and I and a couple of other people thought, 'Well, maybe we should come back tomorrow night; because people were exhausted, including cameramen. They had had their eyes in the viewfinders for 18 hours. And he said to me, 'Can you do it one more time?' I said, 'Yes — can you?' He said, 'Yeah, lemme talk to them.' And then he went to the other Rolling Stones and said this is it.'”

Future Black Sabbath co-founder Tony Iommi performed that day with Jethro Tull and recalled that he had no idea that the taping would become as legendary as it has: “I had no idea, quite honestly. It was all new to me, and I was thrown right into this pile of people who I'd never met in my life — John Lennon, and sharing a dressing room with the Who and the Stones, Marianne Faithfull, and it was all like a big party. It was incredible, really. And then they started jamming, and there was a few jams going on — Clapton and the Stones and John Lennon — and quite honestly it sounded bloody awful! And Ian (Anderson) says to me, 'Well, what do you think of your, your heroes now, then?' (Laughs) I went, 'Oh, all right.' (laughs)”

Highlights include Taj Mahal — featuring Jesse Ed Davis — performing “Ain't That A Lot Of Love”; the Stones' live debuts of “Parachute Woman,” “You Can't Always Get What You Want,” “Sympathy For The Devil,” and “No Expectations” featuring Brian Jones on slide guitar; and Lennon, Clapton, Richards, and Mitchell tearing through the Beatles' then-recently released 'White Album' classic “Yer Blues.”

The Rolling Stones' Rock And Roll Circus was released on CD and home video in 1996. The 2004 DVD version contains bonus content, including interviews and some performances that weren't part of the film.

Mick Jagger credited director Michael Lindsay-Hogg for some of the more interesting ideas featured in The Rock And Roll Circus: “Michael Lindsay-Hogg is a very creative guy. We came up with this idea and the whole idea, obviously, is to make it a mixture of different music acts and circus acts, taking it out of the normal and making it slightly surreal. . . mixing the two up. And also we wanted as many different kinds of music as possible. So that’s why we thought about who would be the best kind of supporting acts.”