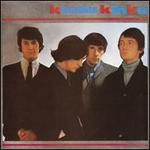 The Kinks recorded the punky, hard-rocking “Father Christmas” for a holiday release following sessions for Sleepwalker, the group's 1977 debut for the then-new Arista Records.

Frontman Ray Davies describes it as “a song about kids beating up Santa Claus.”

Actually, the theme of the exuberantly performed “Father Christmas” is somewhat more dour, reflecting the tight economic crunch felt by the British populace during the reign of Prime MinisterMargaret Thatcher — “Father Christmas, give us some money/Don't mess around with those silly toys…We want some bread, so we're making some noise/Give all the toys to the rich little boys.”

Lead guitarist Dave Davies opined that “People do think like that at Christmas, especially people that grew up in an environment where…not that we were poor or anything, we were just a regular working class house. I could see the faces of my parents when Christmas came around. They had to struggle to make ends meet. We kind of got what we needed, but there was something fake about the holiday. I don't think Jesus was actually born on that day; they moved it to coincide with some sort of pagan ritual.”

“Father Christmas” was first released as a one-off single for the holiday season and became a recurring favorite. It's appeared on several holiday music compilations and made its first appearance on a Kinks album in 1986 on Come Dancing With The Kinks, a retrospective of its Arista years.