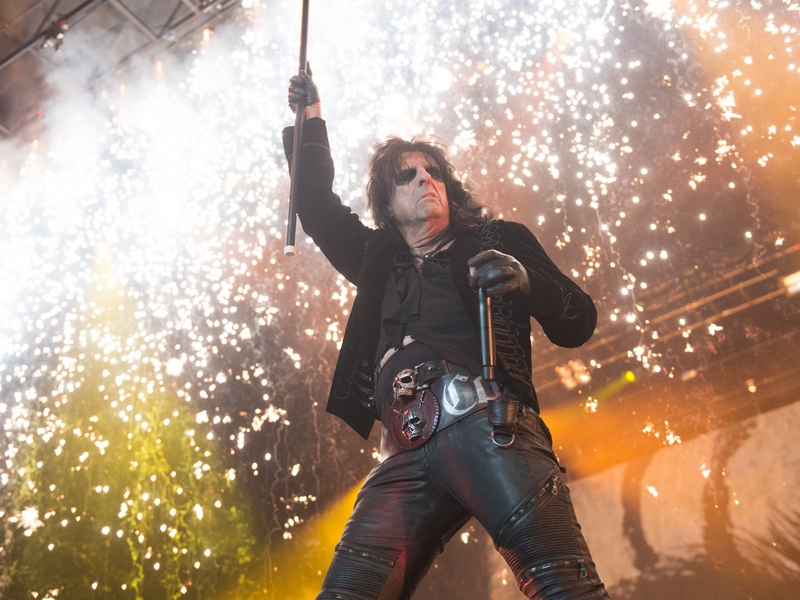 Available now for pre-order is the new book, Alice Cooper @ 75, by famed rock journalist Gary Graff. The career-spanning tome will be published on January 31st — just ahead of Alice’s 75th birthday on February 4th and is described as “a lavish illustrated biography of the original 'shock rocker,' examining an extraordinary career through the lens of 75 key events, releases, and collaborations.” The 208-page Alice Cooper @ 75 includes a whopping 350 color and black and white photos and sells for — you guessed it — $75.

According to the book's official announcement, “Every page is illustrated with stunning concert and candid offstage photography, as well as gig posters, album covers, period ads, and more. Bonus material includes a sturdy slipcase, a gatefold timeline, two pullout posters, and a previously unpublished 8-inch-by10-inch. This book (chronicles) Cooper’s career from teenage garage rocker to international star and celebrity.”

We asked author Gary Graff, who's known Alice for decades and covered every aspect of his incredible career, why year-after-year, Alice Cooper continues to excite a thriving, ever-growing fanbase: “Alice has stood the proverbial test of time for a lot of reasons. One is, while he doesn't necessarily have a mountain of hits — he has enough that still sound contemporary here in 2022/2023. 'School's Out' is permanent. There is a place for that song in the permanent calendar every year. The show itself never gets old. Y'know, people know if they haven't bought an Alice Cooper album in 25 or 30 years they'll still go see an Alice Cooper show, because they love it. They love the theatrics and he usually puts together a pretty rockin' band.”

Unlike so many '60s and '70s hard rockers, the old school entertainment establishment took to Alice Cooper immediately — welcoming him into a club who's doors had seemingly been shut for decades. Gary Graff explained how and why Alice Cooper was able to transcend the boundaries that usually kept rock confined to the kids: “Basically what happened is, Hollywood got Alice Cooper and Alice himself is very articulate in talking about this; that those guys in the Friars Club looked at Alice as a younger guy doing a modern version of what they were doing. They saw in Alice the vaudeville. They saw the schtick — they did not see the demon. They did not see the devil. They saw a performer younger than them but the 1970's version of the pie in your face.”