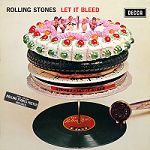 Many people believe “Gimme Shelter” is about the infamous 1969 Altamont concert, where Hell's Angels security guards stabbed 18-year-old Meredith Hunter to death. It was, however, recorded long before Altamont, and the Let It Bleed album was actually released the day before the concert.

A clip from Gimme Shelter, Albert & David Maysles's film about the Rolling Stones' 1969 tour that ended at Altamont, led to the trial of Hell's Angel Alan Passaro on murder charges. The jury, which only heard from one witness, found Passaro not guilty.

Though some people assume that Stones' friend and occasional touring mate Tina Turner recorded the song's female vocal, it was actually a relatively unknown singer named Merry Clayton.Rock singer Bonnie Bramlett was originally supposed to sing that part, but her husband, Delaney Bramlett, started a fight because she hadn't asked his permission first, so Clayton stepped in.

“Gimme Shelter” was never released as a single.