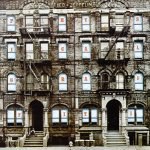 Recorded: 1971 at with the Rolling Stones Mobile Unit at Headley Grange, England.

The Middle Eastern aura that surrounds the eight-and-a-half minute epic “Kashmir” came from a longtime fascination the members of Led Zeppelinhad with the music of that region.

Jimmy Page pointed out that the band's incorporation of Middle Eastern musical elements makes the song “sort of pseudo-Indian and pseudo-Arabic… What comes out still has a sort of Western feel, in the combination, the fusion.”

All members of the band felt that “Kashmir” not only represented the high point of Physical Graffiti but was also the pinnacle of the band's musical achievement. John Paul Jones said that, “It's all right there, all the elements that defined the band.”

Added Robert Plant: “It's one of my favorites. 'All of My Love' and 'In The Light' and two or three others really were the finest moments. But 'Kashmir' in particular — it was so positive, lyrically.”

The identifying riff actually began as a tuning, an extension of a song cycle Page had been messing around with for years. In Plant's opinion, however, much of the song's success belongs to the late John Bonham's drumming. Said Plant: “'Kashmir' was tremendous for the mood. A lot of that was down to Bonzo, what he played. Page and I couldn't have done it without Bonzo's thrift. He was a real thrifty player. It was what he didn't do that made it work.”

Contrary to other rockers who moan about life on the road, Plant is an avid traveler. It was the long drive from Goulimine to Tantan in Southern Morocco that provided the inspiration for “Kashmir's” lyrics: “The road went on and on and on. It was a single track road which cut neatly through the desert. Two miles to the east and west were ridges of sandrock. It basically looked like you were driving down a channel, this dilapidated road, and there was seemingly no end to it.”

“Kashmir” is one of the few Zeppelin songs to employ outside musicians. Page later admitted that session players were brought in to provide the string and horn sections in the song.

The band was so fond of the song that it was included in every live show after its initial debut in 1975, right through to the final concert in 1980.

The song became a centerpiece of Page and Plant's Unledded project in 1994, which employed an orchestra and Moroccan musicians for an epic rendition of the song.