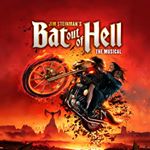 Recorded: Early 1977 at studios in upstate New York and in New York City

Prior to recording the landmark Bat Out Of Hell album, Meat Loaf — born Marvin Lee Aday in Dallas, Texas — was a musical stage actor whose credits included roles in Hair, Rainbow, The National Lampoon Road Show, and The Rocky Horror Show.

He also recorded an album for Motown with Hair castmate Stoney (future Bob Seger and Little Feat singer Shaun Murphy), from which a single, “What You See is What You Get,” hit Number 71 on the Billboard Hot 100.

Just before commencing work on Bat Out Of Hell, Meat Loaf sang on Ted Nugent's 1976 album, Free For All.

“Two Out of Three Ain't Bad” was the first hit from Bat Out Of Hell, peaking at Number 11 on the Billboard Hot 100 and earning a gold certification.

With songs composed by Jim Steinman — who Meat Loaf met when he moved to New York City in 1971 — Bat Out Of Hell was indeed a monster, selling more than 13 million copies in the U.S. and nearly twice that many in the rest of the world. It spent 82 weeks on the Billboard 200 — peaking at Number 14 — and an incredible 471 weeks on the U.K. charts, where it ultimately hit Number Nine. It also topped the charts in Australia.

Steinman originally composed the songs for Bat Out Of Hell for a new musical, Neverland, which has been described as a futuristic version of Peter Pan.

Bat Out Of Hell was taken to two labels — RCA and Warner Brothers — before Cleveland International gave Meat Loaf and Steinman the creative control they desired, including the go-ahead to use Todd Rundgren as a producer.

Meat Loaf finished the 170-show tour for Bat Out Of Hell in October 1978 in Toronto, where he fell off the stage and tore ligaments in his leg, forcing him to spend a month in a wheelchair.